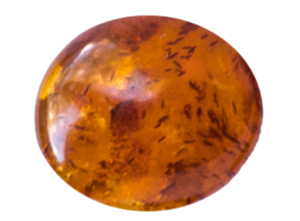 Amber, whose deep, warm golden colour is immortalized in its name, has been valued for its beauty since man’s history began.  Amber is fossilized tree resin, and often contains pieces of ancient plant and animal life, preserved for millennia in its golden embrace.  In 440 BC Nicias of Athens described it as “a liquid produced by the rays of the sun.”  Sailors hundreds of years ago used to burn amber in the belief that it would ward off sea serpents and protect them from the perilous deep.

Today Amber is believed to have powerful healing properties, which transform negative energies into positive ones.
It clears the mind and eases stress.