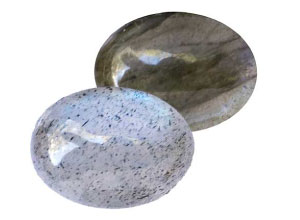 Labradorite, with its flashes of peacock blue, gold and deep red, has a truly magical appearance.  It has inspired legend for centuries, and the Inuit’s believed that a warrior roaming the far north coast saw mystical lights trapped in some rocks.  With a swing of his mighty spear, he set the lights free, and that is what we know today as Aurora Borealis, or the Northern Lights.

Labradorite is believed to protect the wearer against negativity and misfortune.  It brings the wearer magical powers to understand their life’s higher purpose.  It helps to temper toxic influences, and restores calm and balance to those who wear it.